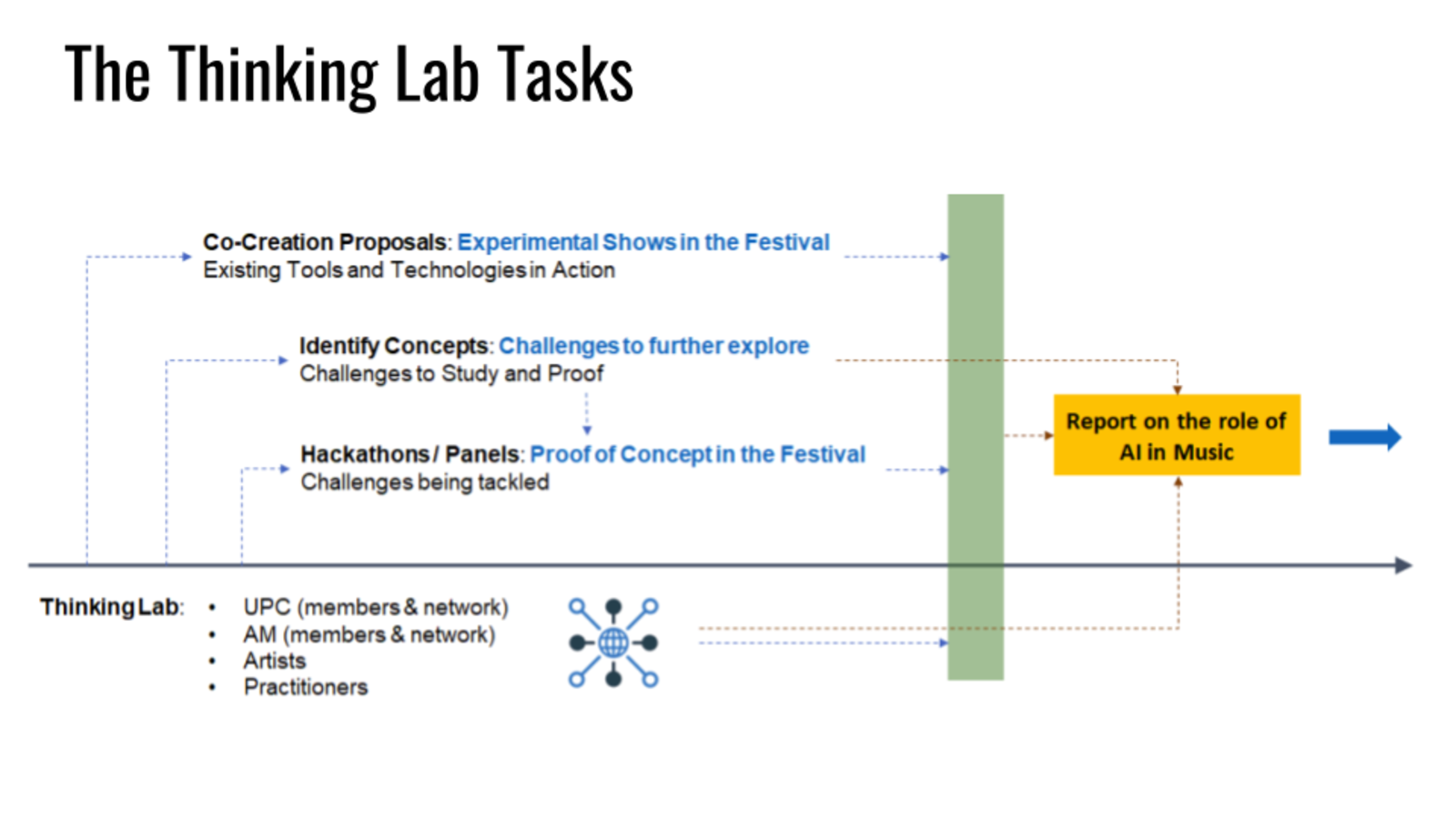 The AI & Music S+T+ARTS Festival Thinking Lab is a space for debate, co-creation and experimentation with the participation of different experts (scientists, artists and practitioners from the industry) who will exchange their experiences and knowledge around AI and Music. The Thinking Lab serves as a think tank, which aims at identifying the core questions, areas of work and challenges  that constitute our collective artistic and scientific approach to AI and Music. The interdisciplinarity and cross-sectoral background of  their members nurture the team, enabling a unique and timely debate in the intersection of AI technologies and Music.

The findings and the discussions arising from the Thinking Lab will be presented on stage in the context of the Festival and will be summarized in a White Paper that will be edited and published a few months after the Festival.

The Thinking Lab operates as a brainstorming catalyst from where key aspects and current challenges of AI and Music are identified and discussed. Depending on their current maturity and complexity, such aspects and challenges are proposed to be further developed in one of the three main components of the Thinking Lab: Co-creations, Hackathons and White Paper. In the Co-creations we develop experimental shows that will be presented at the Festival. Co-creations are formed by engineers from UPC and artists curated by Sónar. At the Hackathons convenied by the UPC community, we test and prototype new ideas, sharing the process with the audience and other communities. Finally, in the White Paper we will summarize the state of the art of AI and Music creation, the main challenges that the community has to further explore and the conclusions of our debates, panels and discussions.

The Thinking Lab initial activities and contributions to the Festival could be illustrated as the following process:


Topics Covered by the Thinking Lab

Exploring Connections between AI and Music

During the months previous to the Festivalthe Thinking Lab has convened two activities that have contributed to the discussions and contents of the Festival.

In May 2021, as a starting point for the discussion, we organized a kick off workshop at the UPC’s auditorium with three artists and three scientists who brought to the table concepts and challenges presented with the aim of creating a basic knowledge and understanding of the area of discussion.

The program of the workshop was:

Three artists who have made AI an integral part of their recent work: Claire L. Evans of the USA based band YACHT, Jan St. Werner, one half of the German duo Mouse on Mars, whose recent AAI (Anarchic Artificial Intelligence) project, moves machine intelligence onto a central, practical and philosophical plane and Ivan Paz, a central figure in the live-coding scene, whose work foregrounds the use of Machine Learning in from-scratch composition.

Watch the entire video of the workshop here.

During the previous months to the AI&Music Festival, the Thinking Lab has had two group discussions focused into four areas of interest: Instruments, Voice, Emotions and Bias. Part of the conclusions and insights of these sessions fueled the contents of the Festival and part of them will be included in the White Paper that will be published after the Festival. Each session had different inspiring talks given by some of the participants of the Thinking Lab. The fourth topics presented until now were covered by Koray Tahiroğlu, Jordi Pons, Antonio Torralba and Libby Heaney.